In  Kuna Yala these loveable, fun, crazy people, Hazel and Wayne, crossed our wake. If you read their incredible wedding story you will probably understand a bit of the fun and laughter two weeks together with them can bring. This is a true story of how they do marriages in Kuna Yala. You can read about our stay in Kuna Yala in «Fra to til perfekt på paradisskalaen» og «Drømmeparadiset vi seilte for å finne«, and see the movie «Kuna Yala part 1 -the movie«.

«Wayne proposed to me on our 12th anniversary. We were not sure where or when we would get married. His family suggested we get married while we were on a family reunion trip to San Blas/Kuna Yala that was planned 6 months later. We were told the traditional Kuna wedding ceremony would be really special, so we looked it up on the internet and read a few really curious things about the ceremony.  Some of it didn’t really sound like our style, so we did not plan to get married this way.

In the summer we went on the family vacation aboard a catamaran named Nikita. There were 10 people on the boat together, 9 close family members and a Kuna host named Roney. Wayne’s cousin JC, who has lived in Panama for many years and also runs a sailing charter company arranged this vacation for us. One day during the trip, all of us went to have a barbecue lunch on the island of Miriadiadup. We ate lobsters and drank coco loco, coconuts filled with rum. Later that night we had dinner together on Nikita, and after dinner we were supposed to all go back to the island to have a bonfire celebration. Most of the family had too much to drink at lunch and did not want to go back to the island. A lot of them went to bed early instead. Wayne’s cousins JC and Ryan, as well as Roney and I were the only ones to go onshore. When we arrived we found out this was to be our wedding. Roney asked us how long we had been together and he said, “you really love each other, why wait?” So we said OK!

Wayne was told to gather palm fronds and build a large bonfire. I tried to help him, but I was told to sit down and watch. Kuna culture holds women in very high regard, so I was not allowed to work on this night. Wayne did a great job and the bonfire was so huge. After it was a raging fire, Wayne was told to jump over it to prove his love for me. So he did! With Roney officiating the ceremony, we stood together holding hands under the moonlight and by the fire as Roney spoke some words in Kuna. It was very magical.

What’s next was the funny part! The couple is supposed to consummate the marriage in a hut with the Kuna grandmother watching. This is one of the traditions that we read about online that discouraged us. After our ceremony the Kuna family on the island let us use their hut and hammock, but said they wouldn’t make anyone watch us. We could hear them outside the hut giggling though. It was awkward getting into the hammock, and Wayne even fell out of it once. The whole thing was a bit uncomfortable, so after a few minutes we decided that we had given it a good effort and shouted “woohoo!” to signal to everyone that we were done. Immediately after, about 15 people came into the hut and dumped buckets of salt water on us in the hammock. This was another thing I had read about online, but had forgotten until the moment we were drenched in water. Then everyone grabbed the ends of the hammock and swung us high in the air. We were laughing really hard. The next morning on Nikita, the rest of the family was quite surprised to hear that we had been married. Some were sad to have missed the ceremony, but they were all still very happy for us.

It was a really fun experience and made us feel very special. After this Kuna wedding, they told us that we were now a part of the island’s family and we were given Kuna names to represent our newly inherited culture. Wayne is Poisu and I am Agdigili, both are names from Kuna mythology. Poisu was a warrior god and is represented on the Kuna flag by the first star on it, and Agdigili was apparently his sister! A little strange, but at least I’m still a goddess. 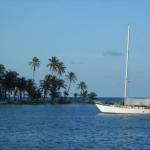 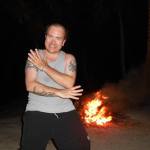 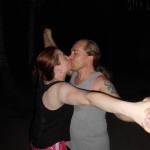 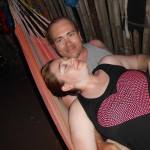 The night of their Kuna wedding. 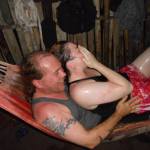 Oh yeah, then they dump water on you :)